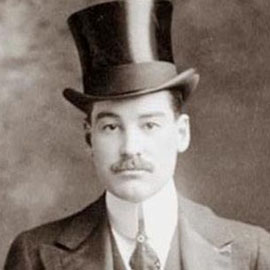 Alfred Gwynne Vanderbilt was an extremely wealthy sportsman and a member of the famous Vanderbilt family of philanthropists. In 1908 he presented to SMYC the ‘Venture International Challenge Cup’ an unusually large Edwardian silver trophy. The trophy is decorated with an enamelled SMYC burgee and engraved “Sussex Motor Yacht Club, The Venture, International Challenge Cup, presented by A G Vanderbilt Esq. 1908”. He died in 1915 at just 28 years old, on the RMS Lusitania when she was torpedoed and sunk within 18 minutes off the coast of Ireland. He was valiant to the last, helping women and children into the lifeboats and even though he was a non swimmer, he and his valet handed and fitted their life-belts to a woman and her child.